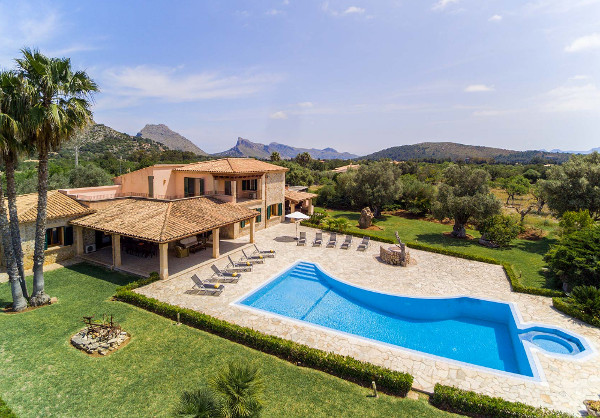 "Villa Les Oliveres" in Puerto Pollensa, Majorca, sleeps 10 people. This large villa has a quiet setting in its own large garden - although is a short drive to both the beaches of Puerto Pollensa and the Roman town of Pollensa. A lovely location for friends and family to holiday together.

Villa Les Oliveres sleeps 10 people in 5 bedrooms - with the bedrooms being made-up of two double bedrooms (both en suite) and three twin bedrooms. There is a further family bathroom.

The living room has a satellite TV & DVD player, with access to the terrace. The kitchen has a cooker, fridge/freezer, microwave, dish washer and a coffee machine.

You have air-conditioning, Wi-Fi, pool towels and a couple of hair-dryers.

Outside Villa Les Oliveres has lawned garden, covered dining area, barbeque, and a table tennis table. There is also your 10 metre by 5 metre pool, and sun loungers.

Palma Airport is an hours' drive from Villa Les Oliveres.

Villa Les Oliveres on the map 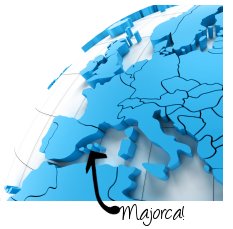 The villa above is Villa Les Oliveres - in the Puerto Pollensa, region of Majorca. We've also listed several other villas on Majorca, so hopefully you'll find something to suit your holiday needs!

Other villas in Puerto Pollensa

If you want to find other villas which are, like Villa Les Oliveres, in the Puerto Pollensa region of Majorca, have a look at the villas in Puerto Pollensa featured here, and see whether there's anything else which takes your fancy. Puerto Pollensa makes a great base for a villa holiday - with restaurants, shops and beaches aplenty around the resort. There's also water-sports of all varieties going on. Well worth having a look.
Want to contact us? just send us a message with Facebook.